Even coming up with a title for this post is almost impossible. Final reflections on Faulkner’s Light in August (by Jill) 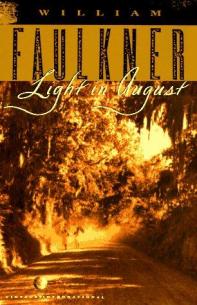 Let me preface my thoughts here today by saying that I think William Faulkner is a genius.  An insane genius, but a genius nonetheless.  For the most part, I truly enjoyed reading Light in August, and am looking forward to our as yet unannounced Nobel Prize winners challenge, wherein we read selections of fiction from Nobel Laureates.  I’m doing odd years and Bethany is doing evens.  I got Faulkner, so eventually in my adult life I’ll be revisiting the southern madman’s universe.  I think it will be good for me.  Nothing staves off senility like having to bend one’s brain around Faulkner.

I marked more passages in Light in August than I ever have before in a book.  I usually don’t mark up my books at all, but since this one had been defiled many, many moons ago, by a version of myself somewhat less able to care for her books than I am now, I figured what could it hurt?  It’s easier to find stuff again if you just notate.  Faulkner’s writing is beautiful and evocative of times and places I’ll never see.  Reading him sort of made me feel like reading anything else was not adequate use of my brainpower.  That does not mean that I understood everything that was going on, far from it.  The last two chapters, as Bethany mentioned, are ridiculous.  Hightower is crazy; Percy Grimm, the fellow who castrates Joe Christmas is crazy; Byron Bunch is crazy for following Lena (or maybe just stupid); and Faulkner is crazy for introducing a furniture salesman in the last chapter of a five-hundred page book to tell the final tale of Byron and Lena.  There was no detectable reason for any of it.  But this is the man who once wrote part of a book from the point of view of an idiot.

One of the things I remember from AP English is the discussion about Joe Christmas as an “isolato,” or someone who engages in profound isolationism.  (That’s one of those terms from the class that Bethany and I often rehash in our reminisces.)  In thinking about this now, there are two isolatos in this book: Joe and Hightower.  Joe’s emotionally isolated, while Hightower is physically isolated.  While Joe’s isolation is voluntary, Hightower’s is very much not so.  I’m sure that this is significant somehow. But at the same time, why does Hightower stay in a community that has rejected him for so many years?  He could go somewhere else.  Maybe he likes to be isolated.

Bethany talked about the circles of the plots in this novel.  Last night I found myself thinking about road imagery while I was falling asleep (and then dreaming about buses.  Coincidence?  I think not).  Joe Christmas thinks about the roads he’s traveled on, Lena Grove walks down a road, Rev. Hightower stares at the road outside his house.  There’s even a picture of a road on the cover.  The road (street, really) begins to fold out in front of Joe Christmas after his beating at the hands of Bobbie the waitress’s pimp/boss.  “He stepped from the dark porch, into the moonlight, and with his bloody head and his empty stomach hot, savage, and courageous with whiskey, he entered the street which was to run for fifteen years (p. 223).”  He jumps off the street for a while when he is living with Joanna Burden, but it still calls to him: “he would stand in the kitchen door and look out across the dusk and see, perhaps with foreboding and premonition, the savage and lonely street which he had chosen of his own will, waiting for him, thinking  This is not my life.  I don’t belong here (p. 258).”  It’s almost like he won’t let himself just settle down and be “happy.”  Does he not want it? Or does he not think he deserves it?  Now that is a question that never does get answered.  While he is traveling on the street of isolation, he picks fights with anyone who will put up their fists.  He fights black men who call him white, white men who call him black, white women who don’t care when he says he’s black.  I wonder how he would have turned out if Doc Hines hadn’t sent him to the orphanage and from there to the McEachern farm.  Or was there just SOMETHING WRONG WITH JOE CHRISTMAS from the beginning?  Obviously there’s insanity in his family.  Doc Hines was crazy long before his daughter had a mixed-race baby.  I wonder if this street Joe always thinks about was just a path he was destined to take no matter what.  Take this for example: “it was not to make money that he sold the whiskey but because he was doomed to conceal always something from the women who surrounded him (p. 262).”  He just can’t help isolating himself in some way from the women who try to love him.  Does that make him a sociopath?  I just skimmed Wikipedia’s entry on “antisocial personality disorder,” the new term for sociopathy.  It kind of fits Joe Christmas to a T.  So I guess I was right earlier when I said there is SOMETHING WRONG WITH JOE CHRISTMAS.  He’s a sociopath.

Lena Grove’s road is more of a literal one, but one that is never going to come to an end.  She keeps chasing after Lucas Burch, a man who does not want to be found, and she doesn’t seem to mind that reality.  Or she doesn’t acknowledge that reality.  After Byron Bunch arranged to have him brought to her in the cabin after she has the baby, he jumps out a window and runs away.  And she still gets up and follows him!  For heaven’s sake, lady, take a hint!  I really think that Bethany is right: Lena Grove is going to be eaten by wolves.  One gets the impression that she could take or leave poor Byron Bunch.  When he almost gives up on her, she doesn’t seem to mind one way or the other.  When he comes back to the wagon with the furniture salesman he says, “’I be dog if I’m going to quit now.’  And her looking at him like she had known all the time what he was going to do before he even knew himself that he was going to, and that whatever he done, he wasn’t going to mean it.  ‘Aint nobody never said for you to quit,’ she says (p. 506).”  There’s probably SOMETHING WRONG WITH LENA GROVE, too.  The furniture salesman thinks she’s just enjoying the ride, without any plan to get anywhere in particular, and I think he may be right.  I certainly can’t come up with any better explanation than that.

And then there’s Reverend Gail Hightower….  Oh dear.  I almost don’t want to say anything about him, other than that he’s got issues.  His grandfather died during the Civil War in Jefferson, and that’s why he insists on being sent there after finishing the seminary.  His wife ends up dying by jumping out of a hotel window in Memphis.  He seems to develop a significant dislike of women after that, as is elucidated in the following statement he makes to Byron Bunch on the reasons why he shouldn’t get involved with Lena Grove (probably good advice, but for the wrong reasons): “’For the Lena Groves there are always two men in the world and their number is legion: Lucas Burches and Byron Bunches.  But no Lena, no woman, deserves more than one of them.  No woman.  There have been good women who were martyrs to brutes, in their cups and such.  But what woman, good or bad, has ever suffered from any brute as men have suffered from good women?  Tell me that, Byron’ (p. 316).”  Obviously Hightower has some misplaced feelings of anger towards women because of his relationship with his wife.  I suspect she was not the only one to blame for the failing of their marriage, what with his constant staring out the window and all.  As the end of the book nears, Hightower thinks he is dying; yet he does not go for help.  He continues to sit and look out the window, waiting for something.  Waiting for the sounds of the battle his grandfather fought in to leave him.  Or for those ghosts of soldiers to come get him.  The next to last chapter that focuses on Rev. Hightower is likely the most confusing thing I have read in recent memory.  I have tried to reread it to make sense of all the pronouns, but I can’t do it.  I give up.  This chapter was meant for more advanced readers than I.  And that’s fine, ultimately.  If I, a mere lover of books with a day job, could make sense of Faulkner, what the hell are all the PhD’s in English going to do with their time?

So there it is.  Month three of the AP English Challenge is all wrapped up.  I don’t know that I have any words of wisdom about what Light in August has taught me about myself or about how I’ve grown and matured since 1994.  I do know that Faulkner is difficult at any age.  I can’t remember that I spent that much time puzzling out Hightower’s chapter back then, or that it even sat with me that much.  If I didn’t understand something, I think I just chalked it up to a failing on my part, and not because the author was borderline crazy.  Now I can see that the last third of this book is near impossible to understand.  Probably people spend their whole lives studying Faulkner.  Why was it not okay to just say when we were seventeen or eighteen, “I just don’t get it”?  I went to high school with a bunch of overachievers, that’s why.  And those of us who were in AP English were the cream of the crop of overachievers.  We were competitive and didn’t want anyone to see any weakness or inability to understand.  That’s certainly one of the reasons why I didn’t talk during discussions—I didn’t want to say anything that could be perceived as less intelligent than anyone else.  I didn’t want to be made fun of.  I already had a complex about not being as smart as everyone else because I wasn’t in AP calculus or AP physics.  Perhaps I would remember more about these books if I had engaged more in class discussions, even if I ran the risk of saying something stupid.  But when a person is thirty-five she cares less about making an ass of herself in front of her peers if it means she has a better understanding of something when the laughter dies down.  At least that’s true when the thirty-five year old is me.