A Review of Toni Morrison’s Home (by Bethany) 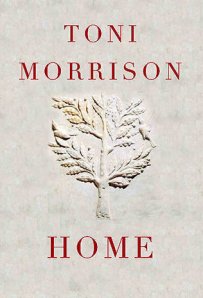 I have a confession to make. I am a lifelong reader with two college degrees in English. I have both affection and respect for Toni Morrison, who wrote the book that I most often identify as my favorite novel of all time: Song of Solomon. I once stood on a sidewalk in Princeton, New Jersey and gazed upward at her office window, hoping to catch a glimpse of her silhouette. For the past four or five years, I’ve made an annual ritual of reading and reflecting on her Nobel Prize lecture on my birthday. And, for reasons I myself don’t fully understand, until this week I had not read any of her novels since Jazz. And even with Jazz, I didn’t really read it; I just kind of sat there and turned the pages.

But now things are different. I’ve read Home, enjoyed it, and now feel a bit silly for avoiding Paradise, Love, and A Mercy. I do know that at least part of my resistance to Morrison’s later work has to do with a slight distaste for fiction that is nonlinear and voice-driven. As I’ve written in other reviews, the language of my heart is pure Dickens. Give me a sprawling city, five or six dozen characters, five or six implausible coincidences, and a dying prostitute who just happens to wear the other half of the protagonist’s locket, and I’m happy. And strangely enough, my beloved Song of Solomon more or less meets these criteria – while also serving as a masterpiece of the rhythmic poetic language that is Morrison’s hallmark. But this novel is an exception. Most of the time, Morrison’s novels are short and intense and personal and voice-driven, full of interior monologues that defy setting in the way that thoughts are wont to do. But it seems as if I might have matured a bit since I yawned my way through Jazz back in 1997. I still don’t think a novel that is structured like this one will ever be a favorite of mine, but I did like it and – more importantly – I was reminded that the only proper attitude toward Toni Morrison is to read every single word she writes – immediately, mouth shut, without asking questions.

While I would never insult Morrison by attempting to summarize her work in a single sentence, it does seem to me as if her great theme is the question of how African Americans treat one another in the context of societal racism. Racism is treated as a constant in her novels – as a part of the setting – not as an antagonist; her antagonists are members of the African American community and/or the fears and failures of the protagonists themselves. This novel’s protagonist is Frank Money, whose slow journey from Chicago to his hometown of Lotus, Georgia after he is discharged from his service in the Korean war is documented in fragments. His journey and his detachment – in a word, his homelessness – reminds me of both Paul D’s rambling in the years after the emancipation of the slaves in Beloved and Pilate’s long journey that is only described in snippets in Song of Solomon . Even with my incomplete knowledge of her work, I can say with confidence that a journey of this kind has become archetypal for Morrison.

Property ownership has always been an important sign of security in the United States. Frank and his sister, Cee, were raised in large part by a step-grandmother who, like Macon Dead in Song of Solomon, valued property more than people. Her cruelty to the children – especially to Cee, who was born “in a gutter” after her family was evicted from their home and therefore, in her step-grandmother’s mind, represents vagrancy and insecurity – dominates their childhood. Frank responds by caring nothing about property and only about his sister. His love for her in their childhood is tender and attentive, but because he fails to teach her to care for herself, she easily falls victim to the schemes of others after Frank leaves for Korea – ending up abandoned by her husband (who, it seems, married her only for access to her step-grandmother’s car, which he promptly steals) and working as a domestic servant (and secret guinea pig) for a eugenicist in the suburbs of Atlanta.

The title of this novel is deeply ironic. “Home” in this novel refers to a person (Frank’s sister Cee), a house (his grandparents’ house in Lotus, to which he is loath to return), a town (Lotus) and a country (the United States). Of these four embodiments of home, only the first is meaningful to Frank – he even rejects a devoted lover on the grounds that “a house with a bowl of sex in it” (69) is not what he is looking for in a home. Robert Frost’s notion that “home is the place that, when you have to go there, they have to take you in” doesn’t apply here; neither the United States of America nor his grandparents feel any obligation to offer Frank any hospitality. When Frank brings a badly mistreated and dying Cee back to Lotus, however, the community of women in this town take her in (effectively expelling Frank from her sickroom) and devote themselves night and day to her recovery – suggesting that in Morrison’s world the idea of ‘home’ is connected to gender at least as closely, and probably more closely, than it is to family.

Cee lives, but her time with the eugenicist leaves her barren. Part of her treatment includes the process of being “sun-smacked” – lying for a period of time with her legs propped up on pillows and her vagina exposed to the direct sun for a period of time every day for ten days, as if her sexual organs are a plant that needs sunlight in order to heal – as if she could somehow develop the ability to perform photosynthesis. The chapter in which she endures this humiliation (and pain? I’m presuming there was no sunscreen involved – ouch!) is full of language and imagery related to gardening: “After Miss Ethel gave her the bad news [that she would never be able to have children], the older woman went into the backyard and stirred coffee grounds into the soil around her plants. Blank and unable to respond to Ethel’s diagnosis, Cee watched her. A small bag of garlic cloves hung from her apron strings. For the aphids, she said. An aggressive gardener, Miss Ethel blocked or destroyed enemies and nurtured plants. Slugs curled and died under vinegar-seasoned water. Bold, confident raccoons cried and ran away when their tended feet touched crushed newspaper or chicken wire placed around plants. Cornstalks safe from skunks slept in peace under paper bags. Under her care pole beans curved, then straightened to advertise their readiness. Strawberry tendrils wandered, their royal-scarlet berries shining in morning rain. Honeybees gathered to salute Illicium and drink the juice. Her garden was not Eden; it was so much more than that. For her the whole predatory world threatened her garden, competing with its nourishment, its beauty, its benefits, and its demands. And she loved it” (130). Gardening in this novel is always connected to women: it is the female equivalent of the male economic obsession with property (and Frank and Cee’s step-grandmother Lenore is always characterized as “unnatural” and set apart from other women because her obsession is of the “male” variety). Gardening represents the self-sufficiency that no one ever cultivated in Cee when she was growing up, and the women who tend her wounds are fierce in their determination that she must learn to care for herself: “You a privy or a woman? Who told you you was trash?… Misery don’t call ahead. That’s why you have to stay awake – otherwise it just walks on in your door” (122).

If we return for a moment to the idea that “home” can be considered in terms of one’s home country, one could say that many or most African Americans of Frank’s generation (and others) grew up in the equivalent of an abusive home – and like many abused children, they are sometimes inclined to pass this abuse on to their own descendants. Frank himself is determined not to; he is determined to treat others with the kindness he himself does not often receive. However, he understands intuitively why people who have been oppressed tend to oppress others. Early in the novel, he sees a woman rush to defend her husband who has been physically expelled from a restaurant because he is black. “He will beat her when they get home,” Frank thinks – note the word home, used here as a place of privacy where scores can be settled – “And who wouldn’t? It’s one thing to be publicly humiliated. A man could move on from that. What was intolerable was the witness of a woman, a wife, who not only saw it but had dared to try to rescue – rescue! – him. He couldn’t protect himself and he couldn’t protect her either, as the rock in her face proved. She would have to pay for that broken nose. Over and over again” (26).

The question that this novel asks over and over again is what do human beings do when they become aware of their vulnerability? Sometimes, they respond with courage and stoicism. Sometimes they run away, only to find, of course, that they are even more vulnerable somewhere else. More often, though, it seems as if they do everything they can to draw attention to the vulnerability others, almost as if it is OK to be vulnerable or weak as long as someone in our immediate vicinity is more vulnerable or more weak. So often Morrison’s novels – Song of Solomon, Beloved – are about individual courageous attempts to break out of this cycle.

To conclude, I’d like to return for a moment to the idea of gender and of “gendered” literature. This morning, a comment from a friend on one of my earlier posts (the one about “man books” and “woman books” – I still can’t believe I am using those silly terms here on the public internet, but there you go. The public likes honesty – or so I hear) made me think about something that definitely applies to Morrison’s Home: when it’s done well, the “woman book” (compressed, rather short, characterized by short, intense chapters, interior monologue, and bursts of emotional narration rather than a great deal of focus on the exterior world) makes the reader feel as if she has read a “man book.” In other words, the sense of a larger world that is conveyed in a novel by Dickens or Victor Hugo or John Steinbeck or John Irving is conveyed equally well in much less space (in the case of Home, in 147 pages). Note that I said “when it’s done well”; I still think that most novels that use this style of narration fail to convey their world effectively and come off seeming ethereal and pretentious. But Home most definitely succeeds. I know Frank’s world intimately by the end of the novel (partly, I’m sure, because it is also the world of Sethe and Milkman Dead and the Breedloves in The Bluest Eye), and the details with which Dickens would have filled another six hundred pages are present in the spaces between sentences. No small accomplishment.